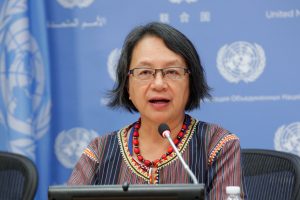 The UN Special Rapporteur on the Rights of Indigenous Peoples, Ms. Victoria Tauli-Corpuz, has released her report on the rights of Aboriginal and Torres Strait Islander peoples in Australia, based on her visit earlier this year.

In her report, Ms Tauli-Corpuz noted that current Government policies and priorities ‘do not duly respect the rights to self-determination and effective participation; contribute to the failure to deliver on the targets in the areas of health, education and employment; and fuel the escalating and critical incarceration and child removal rates of Aboriginal and Torres Strait Islanders.’ She argued that comprehensive revision of those policies must be a national priority, and the consequences and prevalence of intergenerational trauma and racism must be acknowledged and addressed.

The Special Rapporteur highlighted the work of indigenous peak organisations, including the launch the Redfern Statement in 2016. The statement laid out six key priority areas and recommendations and covers issues ranging from engagement, health, justice, violence prevention, disability, children and families and called for a new dialogue with the Government to address the major challenges facing Aboriginal and Torres Strait Islander peoples. DPO Australia member, First People’s Disability Network Australia, had a key role in developing the statement.

The Special Rapporteur made a number of recommendations to Australian Governments, with a particular emphasis on the need for policies and initiatives that fully and meaningfully support self-determination of Aboriginal and Torres Strait Islander peoples.